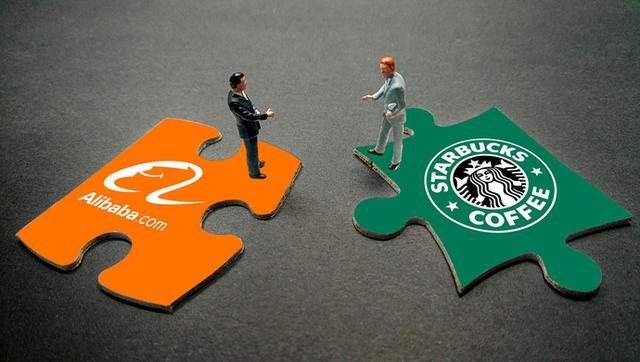 Thanks to a friendship between Howard Schultz and Jack Ma and a thirst for increased business, Starbucks also is becoming a poster brand for the New Retail or digitalized retail in China.

The new retail is about bringing technology into the stores -- artificial intelligence, augmented reality, robots, QR codes, mobile payments, mobile apps with more content that you need to know about everything in the stores, and speedy deliveries.

Alibaba and Starbucks are far from the only players angling for space in this new arena of retailing. Giant e-commerce and logistical company JD.com also has a flagship where it shows off its tech prowess, namely the QM furniture store in Beijing. New retail is front and center right now thanks to the 11.11 e-commerce shopping holiday, see prior post. And both Alibaba and JD.com have gotten into digitalized supermarkets - Alibaba with Hema and JD.com with 7Fresh. The Hema stores bring the fulfillment center into the store, using conveyor belts that whisk orders to customers.

I've seen the new retail at work now in several locations in Beijing and Shanghai. This new concept, which is supposed to make shopping more efficient and easier and perhaps more fun too, seems to be popular with the locals. Chinese consumers, particularly China's 415 million millennial population, are known for adapting quickly to new tech.

Starbucks is leveraging several new-fangled services from Alibaba to increase its coffee orders amid some pretty stiff competition from a local upstart called Luckin Coffee that offers lower prices. The American brand is selling on Tmall marketplace, using Alipay and leveraging  delivery services from Alibaba's Ele.me to get coffee to online customers quickly -- for a delivery fee of 9 RMB. Starbucks is also experimenting with a kitchen inside Hema that can handle large volume and could work well for the enterprise market.

Coffee is still new to many Chinese consumers so there is plenty of room to grow -- and Starbucks is making sure China's upwardly mobile consumers are properly introduced to how to consume coffee. There's a pairing bar in the store, which shows what goes well with coffee. We already know that in the west - chocolate for one.

You May Like
Customer Service jjgle@ubmsinoexpo.com
SubscribeDiscover the latest trends of furniture industry
Join UsBuyer/Supplier/Designer